Our team at Five Star Heating & Cooling is happy to serve the residents of Hilliard, OH with the best local Heating, Cooling, and Indoor Air Quality solutions at the most competitive price rates in the market. We are a preferred local HVAC contractor of choice in the Franklin County and Central Ohio area for heating and cooling services.

Getting to Know Hilliard, OH

Located in Norwich Township, the City of Hilliard is a suburb of Columbus in Franklin County, Ohio. With an estimated population of 36,534 people, Hilliard is home to “The Early Television Museum,” which is the only museum of its kind in the U.S. It is also home to the second biggest First Responders Park in the nation, in addition to the Heritage Rail Trail. Located in front of its fire department off Northwest Parkway, Hilliard also has the only flag pole that isn’t in a museum that came from the World Trade Center.

Geographically speaking, the Hilliard area sits between Big Darby Creek on its west side and the Scioto River on its east. Originally called Hilliard’s Station, the town started forming near the railroad route of the Indiana and Piqua Railroad stations, which split the former farmland. Hilliard’s Station was an ideal shipping point for agricultural products heading to market and supplies needed by farmers in the area. The first Hilliard area was laid out in 1853 by John Hilliard, after whom the town was named.

The old railroad station and the Main Street served as the center of the town until the mid 20th century. A post office was erected in Hilliard’s Station in 1854, and soon the word “Station” was removed from the town name. On July 13, 1869, Hilliard became a village officially with a population of around 280 people. In 1886, the first railroad station was erected on the north side of the line, west of the town’s Main Street. It was there until all railroad services ended in Hilliard in 1962. Today, that original train station is still standing and it was restored and preserved in Hilliard’s historical Weaver Park. On Dec. 12, 1960, Hilliard earned the status as a city officially when the population reached 5,633 residents.
When the I-270 outerbelt was finished in the early 1970s, Hilliard saw a second wave of explosive growth. Land used today in Hilliard is still a mix of residential and commercial properties. There is a rich heritage of historic residential structures and unique architectural styles that can be visited in the historic district along Norwich Street.

We are your local, family-owned and operated HVAC company, and we can repair central heating and cooling systems around the clock here in Hilliard, OH. Day in and day out, our HVAC service vehicles arrive as scheduled, calling ahead to let you know we’re on our way; our vehicles stay fully furnished with the latest HVAC equipment and technology. We carry a wide range of HVAC system filters, switches, fuses, HEPA filters, and more.

Five Star Heating & Cooling Group Rated 4.9 out of 5 stars based on 21 customer reviews

We recommend you to everyone.

Chris was thorough. It was a late night and he took the time to troubleshoot and find the issue.

We received top care and advice and a discount for the next time.

Great service by one of your technicians

Your technician was helpful, courteous, knowledgable and quick to solve the issue.


Randy, Thank you for taking the time to review our company. We are so thrilled to hear you had a 5-star experience.

Fast service, and honest. Tech Chris was so professional.

tech was kind and informative

There wasn’t much he could do, the issue is still ongoing. But, he did all he could as the issue wasn’t currently on going when he got there

We hired Pickerington Heating & Cooling to inspection a home air conditioning system in a house that we are considering to purchase. The individual that Pickerington sent to do the inspection was outstanding. He was very knowledgeable and confirmed our suspicions that the system was not working properly. He was able to identify the problem and present us with different options for fixing the AC. He walked us through every aspect of his inspection, gave us all of the options, and did not do any 'higher pressure' sales pitch to us. His inspection provided us the information we need to discussion remediation solutions with the seller. Thank you Pickerington.

Best experience with heating and and air provider ever

I completed a diagnostic call and found the system leaking condensate out secondary drain. Installed male adaptor and cap to stop leak

I completed a diagnostic on an A/C making noise while on and while shutting off. When I arrived the system is currently cooling home. I inspected the unit and found schrader core leaking slightly on liquid side. I do not have a schrader core on my van so I will come back out with one to get it replaced.

I completed the spring tune up on an air conditioner. I visually inspected the furnace. Checked voltage and amps. I inspected the evaporator coil. I checked the temperature difference across the coil. Checked refrigerant charge, voltages and amps. I rinsed the condenser coils with water. Cycled and monitored the system. Operating normally at this time. 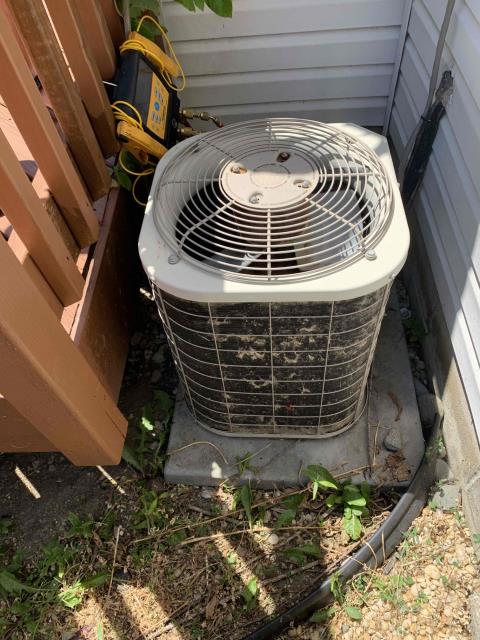 I completed a diagnostic on an A/C blowing warm air. I inspected the unit and found the filter is dirty. Customer replaced it. I found a bad capacitor as compressor would not start. I replaced capacitor. I cycled and monitored the system. Operating normally at this time. 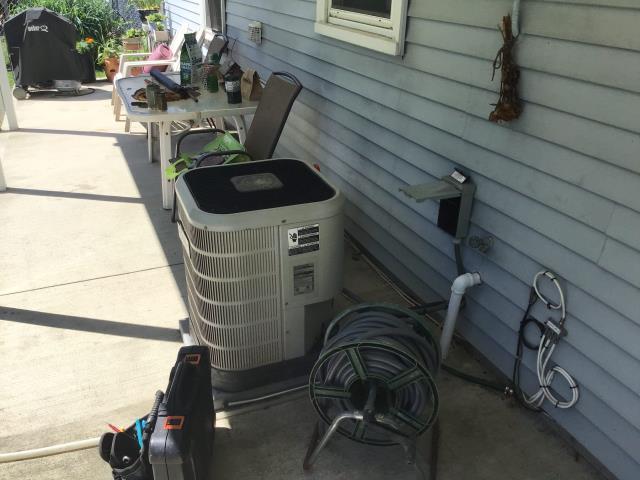 I completed scheduled maintenance spring tune up on a Carrier heat pump. I visually inspected the furnace. I inspected the evaporator coil. I checked the temperature difference across the coil. Checked voltage and amps. Inspected heat pump. Checked refrigerant charge, voltages and amps. I rinsed the condenser coils with water. I found the capacitor out of specs so I replaced that under warranty. Cycled and monitored the system. Operating normally at this time. 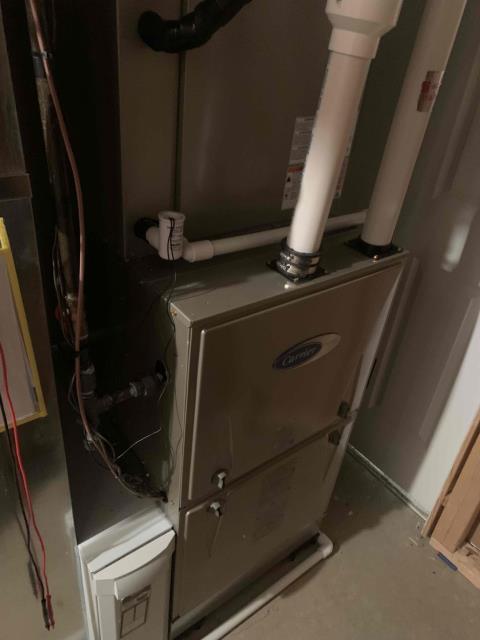